This is part 1 of a four part series on the legacy of Dr. Martin Luther King Jr. and his relevance to the present (Part 2)

Each year in the United States, right before Black History Month, we celebrate the federal holiday of Martin Luther King Jr’s birthday. Mainstream media coverage usually focuses on King’s leadership in the civil rights movement in the United States during the 1950s and 60s. His relentless commitment to racial equality was second-to-none and deserves all the attention it gets every year.

However, the breadth of King’s activism for love and justice was much broader than the bounds of the U.S. borders or the plight of African Americans alone, for which he is most often singularly associated. Guided by an unwavering moral compass, King advocated for and committed himself to activism for justice in all its forms.

On the one hand, one could argue that some contemporaries grant King too much credit as if he were the sole leader of the civil rights movement in the 60s. Undoubtedly, he was a tremendous leader, but the civil rights advances won in the 60s were due to an awakening in the American psyche that fomented a wellspring of activism that included many other leaders and millions of Americans.

On the other hand, the reality is his advocacy and impact spread well beyond domestic civil rights. He was a vociferous critic of American imperialism (specifically the U.S.’s calamitous presence in Vietnam, well before that became a domestic majority opinion) and the military industrial complex, while persistently challenging economic models and access to health care, dignified work and education, all of which he felt were not distributed evenly enough.

One notable aspect of this true king’s legacy was his decidedly un-American global awareness. The foundation of his activism was heavily influenced by India’s Gandhi who had leveraged the nonviolent civil disobedience philosophy and methodology to manifest unparalleled progress for people of color 50 years earlier on the other side of the world, leading to India’s independence from British imperialism.

While we by no means live in a “post-racial society,” the civil rights movement King and others led did rectify most federally codified racism. However, the aspirations King so passionately and generously shared from behind the pulpit of the promised-land of economics, health care justice, and a reduction in militarism remain highly relevant yet unfortunately largely unrealized to this day.

Many of King’s dreams from 50 years ago directly challenge the concentrated institutional powers of today. The effect: these analyses, without which his true legacy is incomplete, have been largely kept out of public discourse ever since the day he left us far too soon.

I knew that I could never again raise my voice against the violence of the oppressed in the ghettos without having first spoken clearly to the greatest purveyor of violence in the world today — my own government.

True compassion is more than flinging a coin to a beggar. It comes to see that an edifice which produces beggars needs restructuring.

King often brought light to the negative consequences he observed within his capitalist America, namely: misaligned incentives with the military industry and basic human dignity, a continued evolution towards materialism and the duality of the profligate wealth of the few juxtaposed with widespread poverty in the wealthiest nation in the world. In part, due to these criticisms, in the era of McCarthyism, he was violently targeted as a communist in one of the most disgraceful acts of abuse of power the U.S. government has ever perpetrated, especially on a domestic hero, known as COINTELPRO. More on that later.

In the final year of his life, King’s Southern Christian Leadership Conference kicked off the Poor People’s Campaign focusing on better access to jobs, housing, and education for the over 40 million Americans (25% of the population at that time) living in poverty. This struggle would take him up to his final day when he was speaking for economic justice at a strike rally for the Memphis, TN sanitation workers.

We must rapidly begin the shift from a “thing-oriented” society to a “person-oriented” society. When machines and computers, profit motives and property rights are considered more important than people, the giant triplets of racism, materialism, and militarism are incapable of being conquered. 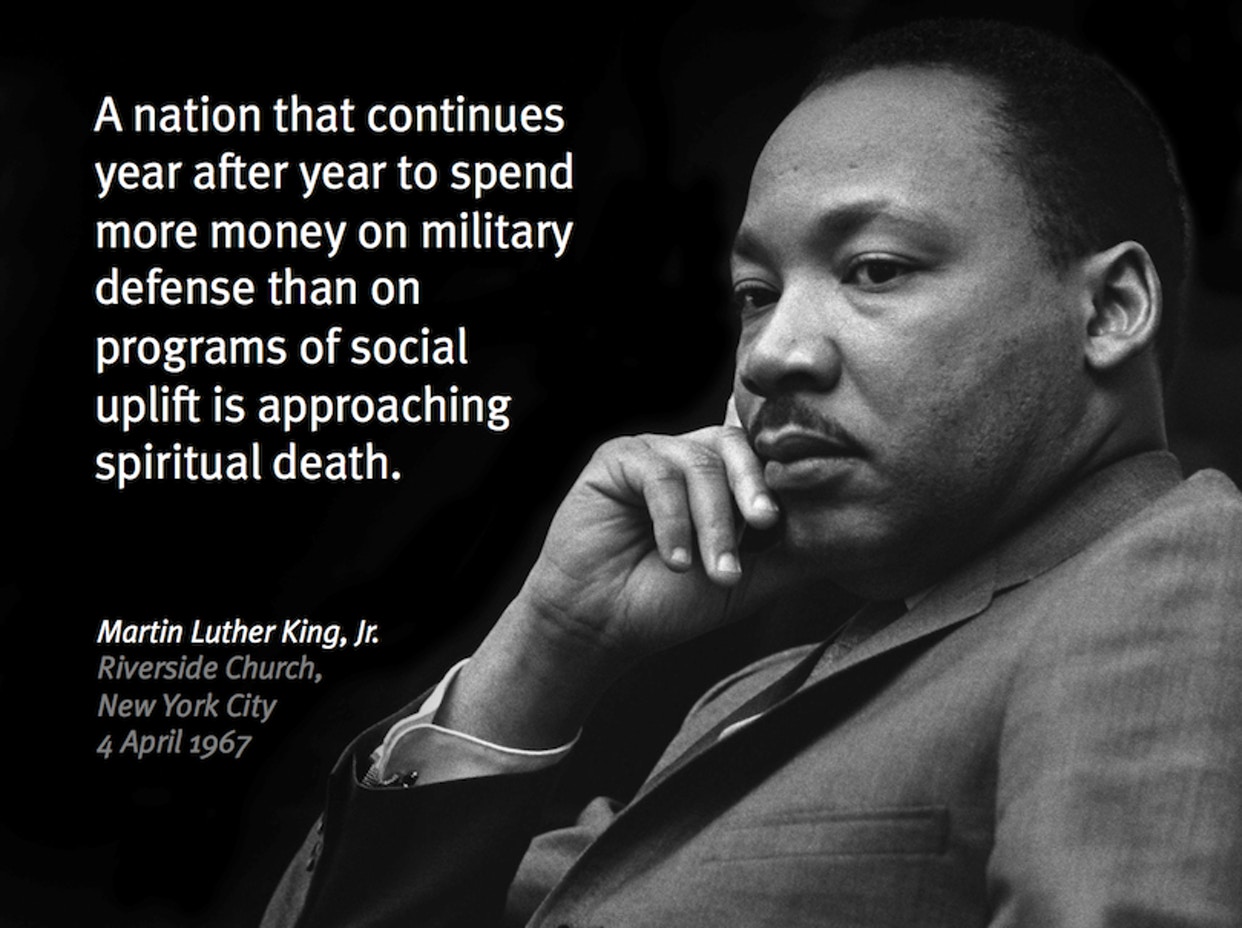 We feel that there must be some structural changes now, there must be a radical re-ordering of priorities… And I feel that this is only going to be done when enough people get together and express their determination through that togetherness and make it clear that we are not going to allow any military-industrial complex to control this country.

On the threat of global nuclear warfare

I must say to you tonight that I never intend to become adjusted to the madness of militarism and the self-defeating effects of physical violence, for in a day when Sputniks and explorers are dashing through outer space and guided ballistic missiles are carving highways of death through the stratosphere, no nation can win a war. It is no longer the choice between violence and nonviolence; it is either nonviolence or non-existence. 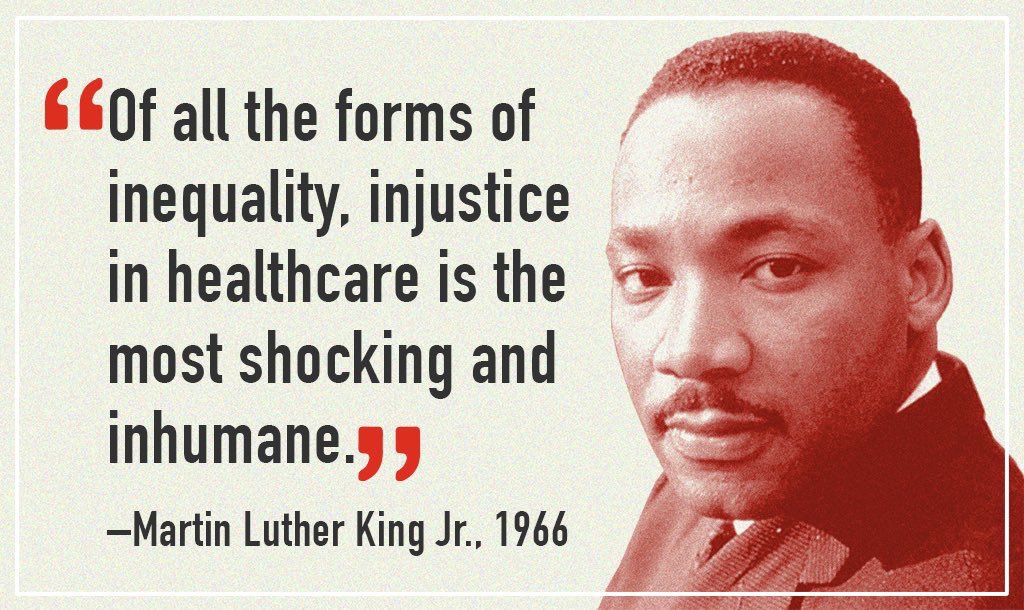 He actually made a stronger point, using the word “inhuman” but it’s often misquoted it as “inhumane.”

Given King’s tremendous following and the fact that many of his public stances were speaking truth to the world’s most powerful government and industries, often his message was profoundly threatening to those in power, and frankly very dangerous to King, for which he would eventually pay the ultimate sacrifice.

Reflecting on the breadth of his morality

Many within the civil rights movement viewed the scope of King’s morality as a distraction to focused, domestic gains in racial equality. The film King in the Wilderness does a great job of showcasing how difficult it was to be the (not always, and certainly not be everyone) beloved Dr. King. He was constantly threatened and challenged throughout – nothing came easily. Yet, given the benefit of hindsight, you’d be hard-pressed to find another leader who was so uncompromising in his commitment and love to all people and forms of justice irrespective of the norms of his time. Ultimately, I believe the broadness by which he applied his principles of unity, peace, love, and justice strengthened his efficacy; he never played favorites.

King has earned his spot as one of the three federal holidays we celebrate in the U.S. each year that honors an individual. Maybe in the not too distant future we will collectively reject commemorating the genocide of Columbus (another of the three), and replace him with a more suitable leader. Washington, we’ll leave you alone for now. In the era in which women are beginning to get credit for things, maybe Coretta Scott King?

In part 2, we talk about King’s later years and how MLK Day became a federal holiday. Spoiler alert: it wasn’t easy.